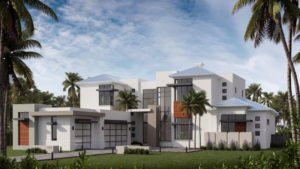 Miromar Lakes Beach & Golf Club, the #1 Community in the USA, continues to blaze new trails in Southwest Florida with the introduction of modern architecture for its Estate Homes in the Ancona neighborhood and Luxury Villas in Trevi. The excitement is building as the first designer-furnished model homes – now under construction – foreshadow the shape of things to come  long the white-sand beach, 700- acre freshwater lake and colorful Botanical Park. Builders and home buyers from across the state are paying close attention to the dramatic architecture of the single-family homes, the first models slated for completion as early as January 2020.

‘Modern’ and ‘mid-century modern’ are among the buzzwords used by the National Association of Home Builders to describe emerging trends in new home construction across the country. The use of black window frames is also on the rise, according to the NAHB, and is a concept Miromar Lakes builders have incorporated into their new home designs. Flat and standing-seam metal roofs, cantilevers, louvered accents and larger windows also convey an emphasis on clean crisp lines and the minimalism of the modern movement. The architecture unabashedly abandons arches, columns, excessive ornamentation and telltale barrel tile roofs, opting instead for sleek wood and stacked stone treatments that play up the contrast of light and shadow.

“People want a more contemporary look to their homes,” says 0f Steven Watt, president of Gulfshore Homes, which  is constructing a two-story Estate model in Ancona, one of only 12 homes in the waterfront neighborhood. “We were thrilled when Margaret approached us about offering modern architecture. It was something we wanted to do. Miromar Lakes has always taken the lead. Look at the Beach Clubhouse. It was such a radical departure from the architecture of other community clubhouses when it opened, but it’s timeless and acknowledges Margaret’s willingness to be on the frontline.”

Modern architecture also tends to favor larger expanses of windows, which in Miromar Lakes “dramatically increases opportunities for the views,” Watt says. “You’ll see the lake as soon as you walk through the front door.” The Gulfshore Homes’ model will also have a wide-open great room, a cantilevered wood arbor and louvered wood awnings in the outdoor living area.

Arthur Rutenberg Homes/Lyons Housing is building designer-furnished models in both neighborhoods. Its model in Trevi, an intimate neighborhood of 11 Luxury Villas along the lake, features multiple levels of fl at roofs, wraparound windows, Brazilian hardwood and stone treatments emphasizing a horizontal linear aesthetic. It will have a pivoting entry door and the interior design will also reflect the minimalistic. “Modern architecture is exactly the change this area was crying out for because it’s not a mainstream look. It’s unique,” says Tim Rose, building company president for Arthur Rutenberg. “This is going to be a strong emphasis for Florida builders going forward. Home buyers and builders from all over the state will come to see this model. What we’re doing in Miromar Lakes is creating a lot of buzz.”

For Divco Custom Homes which is building a model in Trevi, “Modern architecture is a style we embrace. Diversity in customers brings diversity in architecture,” says Alan Foster, vice president of sales and marketing. “Divco is pleased to be able to adapt architectural styles to the wants of the market.”

Seagate Development Group is building an Estate model home in Ancona which will feature clean-lined, high-end finishes and interior design, including a reverse soffit backlit LED ceiling. “We’re excited to be part of this and to create something that’s new to the market,” says James Nulf, president and partner of Seagate Development Group. “This home is cutting-edge and in keeping with Margaret’s vision. We’re seeing demand for this type of architecture.”

Adds Gulfshore Homes’ Watt: “We’ve had amazing feedback from our modern renderings. Customers love it.” Harbourside Custom Homes and Randall Mitchell Custom Homes are also among the preferred builders in Ancona and Trevi. Both neighborhoods off er options for boat docks.

Miromar Lakes is Southwest Florida’s most award-winning community, repeatedly honored for its resort-inspired amenities, exceptional lifestyle and luxury homes nestled along Lake Como, three miles of white-sand beach and the only Arthur Hills Signature Championship golf course in the area. Miromar Lakes has received nearly 200 awards, including the 2019 Grand Pinnacle Award for Residential Developer of the Year and 2019 Community of the Year Awards from the Lee Building Industry Association and Collier Building Industry Association. Miromar Lakes is the only Florida community to win the prestigious Gold Award from the National Association of Home Builders as the #1 Community in the USA. The Beach Clubhouse received the NAHB Gold Award for the Best Clubhouse in the United States; no other community has ever won both Gold Awards.